The Metabolic Syndrome Epidemic: How Low-Fat Diet Fad Made Us Fat!

Some time ago, a 66-year-old male with metabolic syndrome, whom I’ll call “Jake” came to see me. Jake is a private kind of guy and was embarrassed by his weight and his poor health. He also doesn’t like doctors, so he hadn’t been to one in 15 years.

Jake had quit drinking alcohol more than five years before, simply in an attempt to improve his health. He found it easier to lose weight when he was off alcohol altogether. A few years ago, he did lose 80 pounds by dieting. But then, he gained it all back again when he went off his diet. And now, his ever-worsening health finally convinced him to see me.

Here was my initial assessment of Jake’s overall health:

How did Jake come to be in this Metabolic Syndrome condition? Several decades ago, heart disease was rising at an alarming rate. At the time, the medical community accused high cholesterol found in fatty foods, as the culprit. The spoken mantra became: Reduce fat. The unspoken mantra: Replace the fat with carbs!(1)

The message was out, “Fat is bad.” We scolded patients for eating fat. They shifted their love of fat to loving carbs. Low-fat foods flooded the market and still fill the shelves in our grocery stores. It got so crazy, that I remember seeing candy wrappers emblazoned with, “Fat-Free!” Then candy must be alright, right?

Meanwhile, the American public grew fatter and fatter as we followed this low-fat craze. As of 2016, the US Centers for Disease Control estimates that nearly 40% of American adults are obese.(2) (Not merely overweight, but obese!) 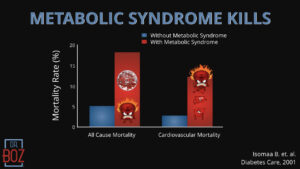 Type 2 diabetes and other metabolic diseases soared to epidemic proportions. These levels have swept so many people into this chronic illness, we need a new term. I suggest the term should be PANIC. We are at panic-levels of metabolic Syndrome.

Add cancer and declining-brain diseases to the list and we hardly have a person left over the age of 50 who doesn’t have a chronic illness. As it turns out, we didn’t know what we didn’t know when we began preaching the low-fat message.

Today, we’ve identified the true, primary culprit: insulin. Don’t get me wrong. We need insulin. Insulin is the hormone that enables cells to take up glucose for energy. The problem isn’t with the right amount of insulin, but with too much. 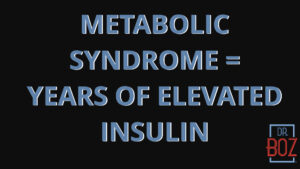 Jake too, fell for the low-fat craze and thought he was eating healthier by cutting out fat. But of course, he too replaced the fat with carbs, and that’s what got him into his current state of poor health and obesity.

Years of consuming a high-carb diet kept his insulin levels high, resulting in all the health problems he now endures. We call this chronic state of elevated insulin, Metabolic Syndrome, Pre-diabetes, or Insulin Resistance. When that inflammation from insulin slithers into your brain promoting memory loss, we call it Type 3 Diabetes. 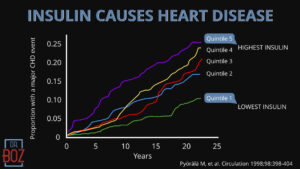 This is what happens when we consume a high-carb diet: (3)

In addition to the above, when we eat fats, our body produces a powerful fat-based hormone called cholecystokinin. This hormone shouts to the brain, “You’re full! Stop eating!” The more fat you eat, the louder this signal gets. This hormone only trumpets it’s message when we consume fat, not from carbs.

So, when Jake came to me, I prescribed a ketogenic diet and told him to lower his daily intake of carbs to 20 grams. At first, he fought cravings for carbs.  He found himself shaking for them. “Doc, this can’t be good for me, I feel like I am going to pass out. I eat carbs and then I feel better.”

I knew if Jake stayed the course, he would be fine.  Just like I know if an alcoholic or opiate addict gets past the first phase of the cravings, the journey improves.  Just because I knew that … doesn’t mean he will do it.

To lessen his burden I dosed with a scoop of “ketones-in-a-can” twice a day. Otherwise known as exogenous ketones or BHB [beta-hydroxybutyrate], these ketones-in-a-can come in powder form. This supplement has been around for years.  I use this trick when people struggle in transition. Jake took one scoop in the morning and one scoop in the afternoon for 2 weeks while he worked on eating fewer and fewer carbs. The 3rd week he was under 20 carbs. The cravings still quivered into his mind, but much less than the first time.  Jake used the supplements a few times that third week and then needed them minimally after that.

On the ketogenic diet, Jake lost 30 pounds in the first 60 days. His blood pressure normalized and he experienced a remarkable improvement in his overall energy levels.

As Jake continues following the ketogenic diet, each week he recruits more mitochondria to work for him instead of against him. His energy steadily grows each week he fuels his mitochondria with fat. Jake’s sixty-six years of living low-fat weakened his immune system, ruined his thinking and slowed down his energy. The age of his brain acted like an 86-year-old instead of a 66-year-old when we first met.

The Moment of Truth

What does your health assessment look like? Any of the following conditions may indicate that your insulin levels are too high and Metabolic Syndrome is likely: A ketogenic diet calls for an increase in fat and a significant decrease in carbs. When you eat like that, it lowers your insulin levels and begins to reverse the harmful effects of the long-term low-fat fad. Eight weeks of redesigning Jake’s health started with oiling the tiny motors inside his cells with ketones. The health of his mitochondria will turn back the wheels of time. He can’t make ketones with elevated insulin. His insulin would not drop until his carbs dropped. Adding the supplement of “ketones-in-a-can” sparked the tiny fire that Jake needed to begin. As his mitochondria began to use ketones, the chemistry storming silently through is body began to shift. Step by step his mitochondria churned out a new breath of life for Jake.

Learn more about Metabolic Syndrome By Clicking HERE or watch my Youtube video: